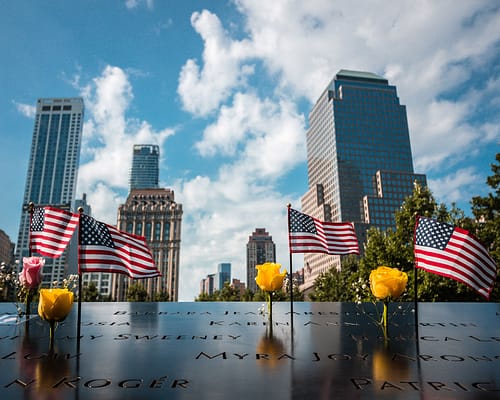 September 11, 2001, a day that will never be forgotten. It is a day that still sends chills up your spine at the very mention of it. It is a day that 2,977 people lost their lives. It is a day that America was attacked on her own soil. It is a day of tragedy and sorrow. There is absolutely no question that at 8:46am on this late summer day, America changed forever. Today, we know it as Patriot Day, but back then, at 8:45am, it was just another Tuesday.

How exactly did September 11th change America? As often is the case with grief, Americans reacted to this horrific event in different ways. Some mourned, while others went into their communities to take action.

In the days following September 11th, there were several candlelight and prayer vigils to mourn and honor the victims of the attack. There were numerous gatherings across the entire country to grieve and pay tribute to the dead and missing. Despite the horrific events that took place, this tragedy we all experienced created a sense of unity and togetherness for Americans.

People gathered together to serve their community.

In the aftermath of the attacks, many Americans came together in their communities. In the days following the initial attacks, while rescue efforts were underway, New Yorkers came together to donate over 36,000 units of blood to the New York blood bank. But the efforts to help the rescue efforts weren’t just limited to New York. Cities and communities across the country sent EMTs and firefighters to Ground Zero, held fundraisers, and blood drives. One day shortly after the attack, there was an entire day’s wait at a blood bank in Madison, Wisconsin. In a partnership with Amazon, the Red Cross raised $3 million dollars in only two days.

Others turned to their faith.

People found solace in their faith, their churches, and their religion. It provided a sense of comfort in a time of such immense feelings of grief and sorrow. Many church leaders implored their members to respond to this horrendous act with love and service in the community, as it is what was needed more than anything in the world.

Famous Americans did their part.

Many celebrities organized and hosted benefit concerts to raise money for the victims and rescue efforts. Different sports teams postponed their games out of respect. Some musicians wrote songs to honor the victims, heroes, and families.

Regardless of how Americans reacted to the events, one thing is certain, patriotism soared across America. The sale of American flags exploded in the days following the attacks. One large retail chain sold over 100,000 flags on the day of the attack and 250,000 the next day, compared with 6,400 and 10,000 the year prior. Americans also began to sport American flag lapel pins.

As you remember Patriot Day this year, remember the heroes. Remember the victims. Remember their families. And most importantly, remember how Americans came together in their communities. As you commemorate this solemn holiday, show your patriotism by flying one of our flags – 100% homegrown, made, and manufactured in America.