We have all seen the image; a coffin draped in the American flag, often done for military men and women as a symbol of appreciation and honor for their military service.  At RealAmericanFlag.com we are proud to honor and hire our veterans.  You should know we were recently recognized by the U.S. Secretary of Labor as one of the 675 recipients of the 2020 HIRE Vets Medallion Award. RealAmericanFlag.com is also a proud supplier to the U.S. Department of Veterans Affairs for our Nation’s Veterans burial flags.

Would it also interest you to know there is no code or rule that says only those who have served in the military can have their coffin draped with an American flag? 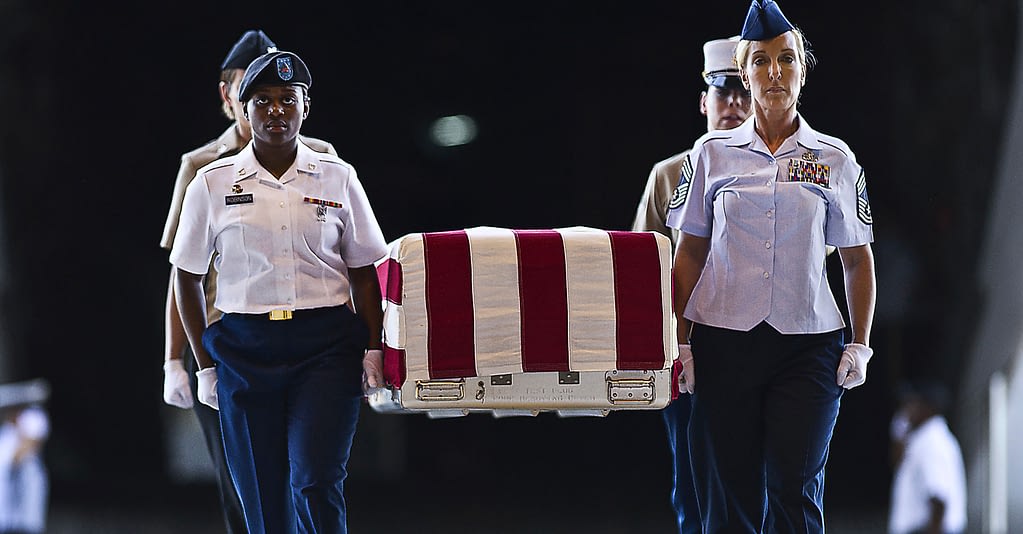 In fact, it is absolutely appropriate for any patriotic person to make a request and be granted the same honor. https://www.ushistory.org/betsy/faq4.htm

This is true for us right here at RealAmericanFlag.com.  Some of our employees have never served in the military but have shown their love of country with every stitch.  You better believe we will honor them with a flag.  You can do the same for patriotic friends or family members and of course military veterans who would be honored to have a burial flag.  We know very well the honor a flag brings to all events and ceremonies.

Let’s talk more about how to display the flag during a burial ceremony for your loved one.

Per the United States flag code:

Because this burial flag holds such significance to the surviving family and friends some want to fly the flag as a noble and patriotic way to honor the life of their loved one.  If this is what you want then we’ll make that happen for you.  See our Flag Care page at RealAmericanFlag.com to read more about flying the flag in an appropriate and honorable way.

If you decide to keep your flag folded, you can place it into a Flag Shadow Box and display your loved one’s Flag in a prominent place in your home.  Flag Shadow Boxes can display and protect your most treasured American flag and some will show off military medals and ribbons and other memorabilia.

There is a lot of symbolism with each of the 13 folds being done in a specific way each fold holding a specific meaning.

Much like every other aspect of our nation’s greatest symbol, each of the 13 folds holds a special significance. Read about them here: https://www.legion.org/flag/folding

Don’t let all the flag rules and regulations keep you from honoring your loved one with a flag-draped coffin.