In today’s politics, American flag lapel and tie pins tell everyone; you’re either in or out. 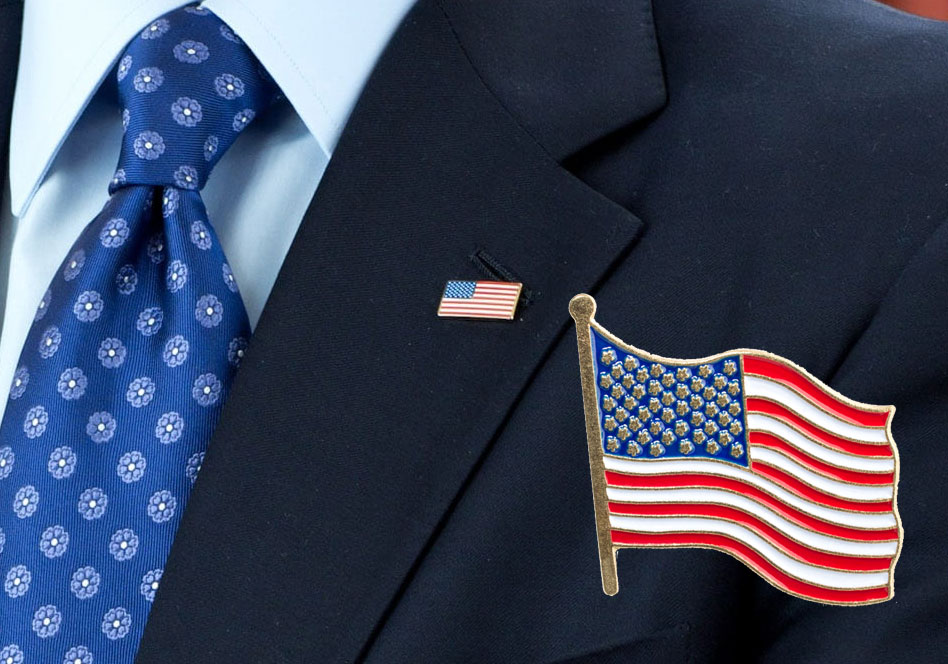 You are probably very familiar with the flag pin worn by many politicians from the POTUS to your hometown mayor.  It is just the perfect size and shape and almost always worn on the lapel of a suit jacket.  Would it interest you to know you’re making a big political statement every time you wear it?

Wearing this pin on your clothing dates way back; think Civil wartime.  According to a 2008 article in Times magazine,  When the Confederates started winning battles, Northerners began to fly the flag attempting to shift the tides of support by wearing the flag as a sign of pride.  Prior to this, few private citizens even had a flag to display less wear.

These days, the flag lapel pin comes out in times of crisis; to either unite or divide.  We definitely saw them in the late 60’s and into the 70’s at the height of the Vietnam war.  It was Richard Nixon who brought the pin to national attention. The President got the idea for sporting a lapel pin from his chief of staff, H.R. Haldeman, who had noticed a similar gesture in the Robert Redford film The Candidate.

“Nixon commanded all of his aides to go and do likewise. “
According to Stephen E. Ambrose’s biography Nixon.

We saw the flag pin again during the Gulf War, as they sold briskly alongside flag patches and yellow ribbons.  These pins really took hold after 9/11 when then-President George W. Bush and all his aides began wearing them.  Politics over flag pins even played out in the world of journalism when some on-camera reporters and anchors would wear them as a sign of patriotism and others would not, claiming a desire to maintain journalistic credibility.

If you already own a flag lapel pin or tie tack, are you wearing it, and are you wanting to send a message?  Either way, according to a post on The Emblem Authority website,  there’s proper etiquette that should be followed with wearing one.

“In a case where an officer is wearing a tie without a blazer, the placement of the pin should be on the center of the tie. There should be no other tie tacks on the tie. The pin should be firmly attached to your clothing and not be able to spin upside down, as this is also considered inappropriate.”

We at Real American Flag do not sell lapel pins, but we do sell 100% Real American Flags.  Everything from the thread to the fabrication is American-made. We believe in the American spirit and support the show of patriotism.  Share with us the pictures of your pins and flags and we’ll share them with the world that loves the United States of America.